The intent of this post is for me, Terry Greene, to pass the Squad Goals Network Social Media ball over to the next contestant. John Stewart, historian of chemistry and super hero of domains, is on for December.

It’s a long toss to throw a ball from Ontario to Oklahoma, but it’s all downhill I believe so that may help. The GIF I provided above should help you visualize this passing over process. John will metaphorically catch the metaphorical football while metaphorically ollying on his metaphorical skateboard and then shred his way through December. I can’t wait to see the all the touchdowns and frontside kickflips he scores.

Some unsolicited advice for you, John.

The theme I chose for the month of November was basic. I wanted to ask those interested in being a part of the Squad Goals Network to say “I’m here!” so that we can start to map our networks to each other. If I were to do it over, I would focus more on asking people directly if they are interested, and how they would like to connect rather than simply asking people to raise their hands. The network grows one bit at time.

Please join me in welcoming John in to the role of Social Media Takeover Person! Follow him here, follow Squad Goals here and on the hashtag #squadgoalsnetwork, and I will see you out there. Thanks for putting up with me in November!

Okay I am ready to actually throw the ball now, John. Go long!

Photo by Patrick Hendry on Unsplash 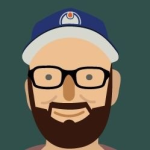 About the Author / Terry Greene